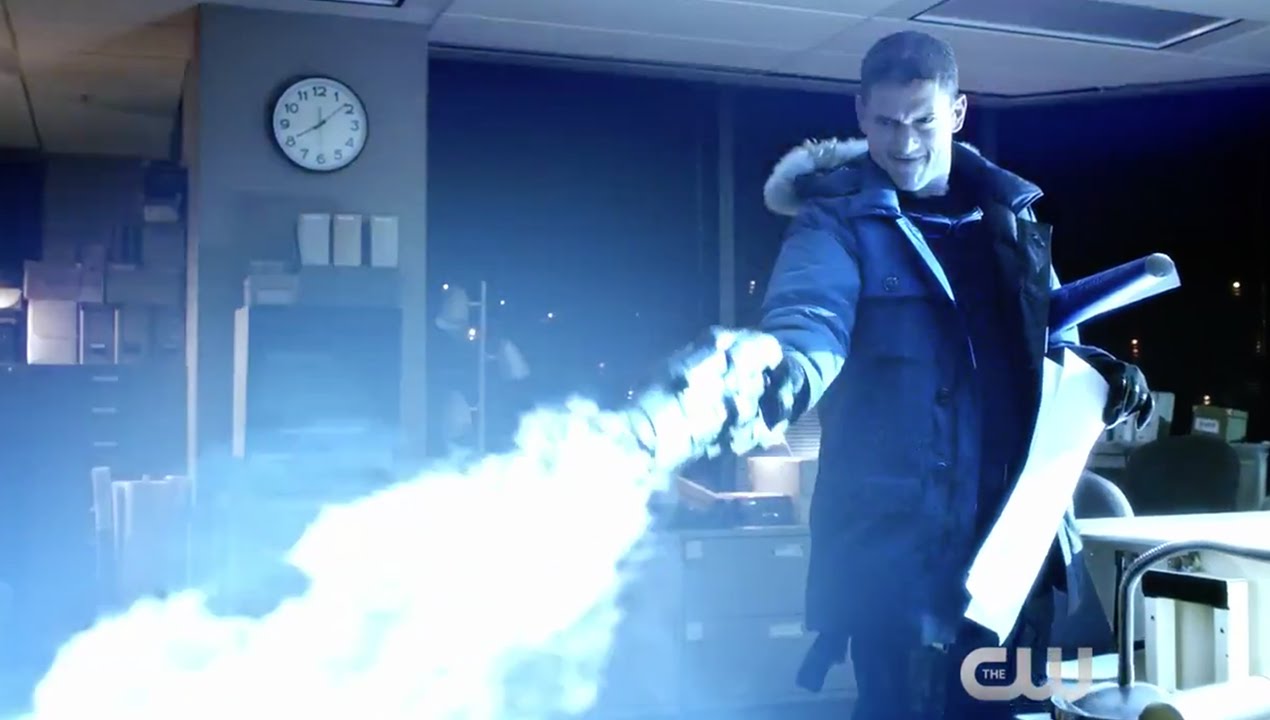 The nation has recently been gripped by severe winter weather, from snow in Florida and South Carolina to temperatures forty degrees below freezing (before wind chill adjustments) in the midwest. If we were in the DC comics universe, we could ascribe responsibility for our weather woes to such usual suspects as the Weather Wizard or Captain Cold.

The comic book physics of the ‘freeze gun’ weapon employed by the Flash rogue Leonard Snart, also known as Captain Cold (who, it must be pointed out, is not actually a captain) can help us understand the physics underlying the extreme weather in our world. Captain Cold would use his unique weapon to ice up the roads (thereby decreasing friction and hindering the Flash’s super-speed) or encase the Scarlet Speedster in a block of ice. However, Snart has explained in the comics more than once that he employs a “cold gun” and not a “freeze gun.”  The difference gets to the heart of what drives all weather phenomena.

Whether a heat wave or a hurricane or deep-freeze, all extreme meteorological events are the result of temperature variations in the atmosphere. Actually, that’s not quite right – it’s the result of changes in kinetic energy of the air molecules. Technically, temperature is just a bookkeeping device that keeps track of the average energy per atom in an object. At a low enough temperature the molecules move so slowly that they succumb to weak inter-atom bonding forces and condense or freeze into either the liquid or solid phases, respectively. It’s a bit simpler to refer to the temperature of cup of hot tea as 100°C, rather than as 5 x 10-21 Joules per atom. Changes in the average energy per atom of an object, such as a cup of tea or the atmosphere, lead to variations in other properties, such as density (the number of molecules per volume). The water molecules in the tea are in direct physical contact (but not so rigidly bound that they can’t slide past each other), while the air molecules in the room you are reading this are physically separated, with an average spacing equivalent to the length of ten such molecules or so. Hotter air moves faster than cold air (greater kinetic energy per atom), so the average spacing between air molecules of hot air increases, and its density is reduced.

As air from a denser region rushes into more dilute volumes, these variations in atmospheric density generate wind. The density fluctuations arise in turn from temperature differences in the atmosphere, that ultimately originate from the amount of sunlight energy absorbed. This will vary due to cloud cover, inducing winds that shift the location of the clouds, changing the spatial pattern of light absorbed, and so on. This non-linear (small changes leading to potentially large outcomes) feedback is why long-term weather prediction is so challenging.

The answer has to do with average temperature, rather than the temperature at any given moment. Think about a large class that has just had a hard exam, where the average grade is 50 out a possible 100. (When this happens in my own class, my students call me a Sweet Old Boy – though often they just use the initials). If one plotted the number of students who received a given score against that score, the result would be the well-know bell-shaped curve. There would be very few students with scores of 0, 5 or 10, more at 30 or 40, the most at 50, and again fewer at 60 or 70, less at 80 or 90 and very few at 100. Now imagine that the teacher awards every student in the class five points extra credit, independent of their performance on the exam (this is an analogy I first employed in THE AMAZING STORY OF QUANTUM MECHANICS). The best students now have a grade of 105, and the students with the lowest scores have now a grade of 5 points. The average of the distribution shifts from 50 to 55, which is not that big of a difference for most students. But those students that had grades of 80 or 90 before now have scores of 85 and 95. That is, while the class average remains a C, the number of students who now would receive an A or A- has increased dramatically.

And this is why we worry about small changes in the average global temperature. For those “A students” at the high end of the global temperature distribution represent days that are much hotter than average. There will now be much more of such days than before, and it is these hotter than normal days that provide excess kinetic energy and drive extreme weather events, from hurricanes to drought or blizzards. Not every such event is due to the increase in average temperature, just as there were a number of A students before the extra credit points were awarded, but when it comes to a category five hurricane, it doesn’t much matter how it started.

What to do? Well, Captain Cold’s gun would remove excess kinetic energy from an object. If only it existed and could work on a global scale. But in the real world, we find ourselves in a car heading downhill on a dark moonless night, not knowing what is at the bottom of the hill. We should certainly keep our headlights on (that is, maintain monitoring of the situation), and even if we don’t hit the brakes, we should at least take our foot off the gas!